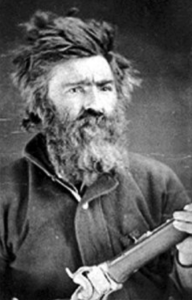 John Garrison Johnston was a mountain man, frontiersman, sailor, hunter, trapper, miner, and trader who moved from New Jersey to explore and set roots in the mountains of the American West.  Some might be more familiar with the names Jeremiah Johnson, Jack Johnson, Crow Killer, Liver-Eating Johnson, or the Livereater, which are all characters that have been derived and influenced by Johnston’s life story.  Being a legend of the West, the media has made false connections with John Johnston’s real story.  The misconception that Johnston extracted and ate the liver of the Indians he killed lead to his nick name “Liver-Eating Johnson.”  This became an important theme revolving around the Johnston myth, but it is busted by Johnston himself and can be seen as an example of a greater theme of American West characters.

During an interview with John Johnston at age 76, a reporter asks Johnston how he got the name “Liver-Eating Johnston.”  The reporter first shares what people say about his liver eating habit and Johnston reacts aggressively, saying “it’s a domb lie!”  According to the reporter, Johnston begins pacing back and forth and repeating “it’s a domb lie,” until he is ready to sit down and tell his real story.  In 1886, Johnston and fourteen other men were hunting and setting up camp when they were attacked by Indians.  During the battle which was just one of many in Johnston life, they manage to kill 36 and wound 60 Indians, losing just one of their own men.  Johnston, being short on ammunition and wanting to save his rounds, chases down an Indian with a knife, scalps him, dances and sings around the dead body, and runs his knife into the Indian taking a piece of the liver out with his knife.  Ross, another frontiersman in their crew, comes running up to Johnston.  Johnston turns to Ross and while waving his knife with the liver still on it he yells out, “come on and have a piece!  It’ll stay yer stomach ‘till you get home to dinner!”  Ross refuses, Johnston tells Ross that he ate some and Johnston makes believe he takes another bite.  Then Ross takes a bit, immediately throws up and after that moment Ross has always thought after he saw Johnston take a liver out of a dead Indian he would eat the liver.[1] The liver coming out was unintentional on my part.  But Ross he vowed ‘twas so and I never got rid of the name.”[2]  In other battles more frontiersmen claim that he “drew the liver across his mouth and let it get lost in his bushy whiskers instead of swallowing it.”[3]  Maybe it wasn’t Johnston’s intention to accidently remove a piece of liver, but was it his intention to pretend to be the character “Liver-Eating Johnson,” creating an image for himself throughout the west?

The book The Avenging Fury of the Plains: John “Liver Eating Johnston” also busts the myth that Johnston ate the liver of the Indians he killed.  This book claims to hold the truth of the real John Johnston and backs up the same exact story Johnston uses in his interview.  Though not as popular as the well known fictional book, published almost fifty years earlier, Crow Killer: The Sage of Liver – Eating Johnson.  This book is based off of John Johnston and claims to be a true story that takes the reader through the life of its character, John Johnson, but not the real John Johnston.  So the story is true for its character, but fictional for John Johnston which tends to give him the myth of eating liver and for the nick name “Liver-Eating Johnson.” The character in Crow Killer also exaggerates John Johnston’s mountain man image which readers can now compare to other mountain men in the west during the same era.

Based off Crow Killer, came the western film Jeremiah Johnson in 1972.  It’s more true to Johnston’s real story because it excludes the myth that John Johnston ate liver and focuses more on Johnston’s settlement into the mountains and his relationship with the Crow Indians.  The character, now Jeremiah Johnson, also based off of John Johnston, enters the mountains from the east coast ­beardless, young, wearing his tight civil war uniform, and with an adventurous spirit that was “suited” for the mountains.[4]  Crow Killer and Jeremiah Johnson, both create an image of the mountain man and frontiersman of the west, portraying them as wild, hairy, independent, fearless, emotionless, and lonely.  After living in the mountains Johnson, grows a full beard, turns on the Crow Indians who he once had a good relationship with, and the animals he kills become the food he easts and the clothes he wears.

The film Jeremiah Johnson and the book Crow Killer show a well known story for the characters usually misunderstood for John Johnston real name and true story.  Their popularity throughout the public spread the myth that John Johnston ate liver leading to the nickname “Liver-Eating Johnston.”  From Johnston’s interview it’s now clear how his nick name “Liver-Eating Johnson” evolved.  The myth that Johnston ate the liver of the Indians he killed is busted from John Johnston’s own words and later on explained in The Avenging Fury of the Plains: John “Liver Eating Johnston.”  But do we really know that these words are true?  Though busting the myth in his interview, could Johnston now older and living a civilized life, have been lying to create a false character for himself during the interview to hide the truth?  Was the reporter who interviewed Johnston creating a false character in his report?  It’s difficult to really know the true story, and trust any of the stories that have evolved.  The John Johnston myth is an example of how the stories behind the legends of the American West can be manipulated and placed into the media which over time lead to misconceptions and parallels of greater themes.  The truth of John Johnston’s liver eating appetite only the real John Johnston will know.